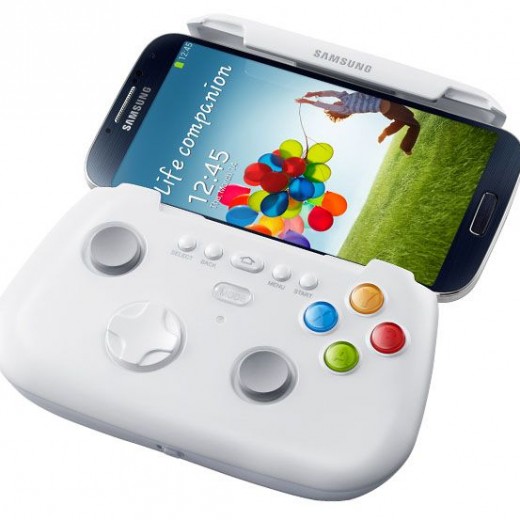 Samsung is already the largest supplier of mobile phones and smartphones in the whole world but the company already has some more ambitions from its highly admired Playstation which is about to release in this year end. Now, Samsung is planning to make a dedicated Game pad for its Note and Galaxy series smartphones. It will make handsets well capable to compete with current portable game systems available in the market.

The Game Pad possesses the capability to transform some of the Samsung smartphones into a nice game console. It appears very similar to Xbox controller with cradle on top that can be adjusted to hold the Smartphone properly. One more surprising thing is that Game pad can be easily connected to any mobile through Bluetooth and you can have an Android game console ready in less time. In addition to this, one can also attach Game pad and Samsung mobile to TV with the help of HDMI cable to get more dedicated and conventional gaming experience.

Game Pad was revealed along with Galaxy S4 and it supports different Samsung smartphones with 6.3” and 4” displays. As it is device from Samsung, it can be only connected to smartphones of Samsung. The confirm list of handsets consist of Galaxy Note II, Galaxy S III Mini, Galaxy S III and Galaxy S4. These devices will require Android Jelly Bean 4.2 to get link with Game Pad. Besides this, the device must possess connectivity of Bluetooth 3.0.

In terms of design, Game pad carries controls which most of the gamers are already well familiar. It features shoulder keys, D-pad, analog sticks, Android specific keys and several action buttons. It fixes phone into a unique frame and then connects it with the help of Bluetooth technology. These special controls will definitely remove those irritating incidents when gaming action is get obscured by fingers. A user can also get different level of satisfaction and pleasure by having physical controller directly in hand. With plenty of devices like GameStick and Ouya consoles are made to transform Android gaming into TV, we may see some more Android games which can be well optimized for this kind of controller.

There is no word on exactly when Game Pad will be released. But there are rumors going on internet that it may hit market in the month of May. Everyone is interesting to see whether Game Pad will able to revolutionize the mobile gaming or not. As Samsung doesn’t have any core experience in gaming arena, the probability of success is very low. However, Samsung is not the only company which has to face numerous challenges and the company will put every effort to make sure that Game Pad won’t fail. If Samsung somehow manages to do this then it may able to fetch significant market which will give them profit for long term. With experience marketing power of Samsung behind Game Pad, the company has got higher chances of getting success as compare to other manufacturers.