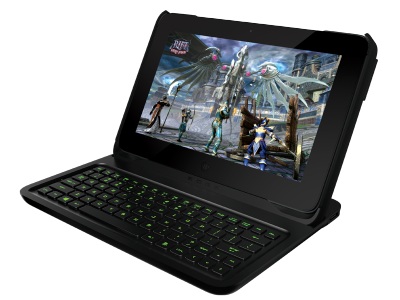 With Razer Edge Pro Gaming Tablet, PC gaming has definitely become more mobile.  There are definitely dozens of such tablets available in the market if you wish to run only Microsoft Word on it. But Razer Edge is mainly about gaming and this is the only purpose why it should be purchased. Here is a quick glance about features and functionality of this tablet.

Though Razer Edge is made up of complete plastic material instead of aluminum, its rear panel features design very akin to the lid of Razer Blade notebook. However, the plastic chassis won’t reduce the tablet’s appeal as users find themselves running their fingers over ridges. Its sides are constructed from aluminum material, which are mainly intended to protect it from the water. Its pair of vents is very useful to keep it cool and its panel also helps to rebuff user’s smudges and fingerprints.

The Razer Edge Pro Gaming Tablet sports the 40Wh battery.  It possesses capability to last for more than 4 hours, which is quite low as compared to other tablets. Such number is also very discouraging for a gaming device. In order to deal with this problem, the company has tried to add battery into a Gamepad. However, the tablet also offers a facility of extended battery which will help it to give additional back up of more than 6 hours.

The tablet supports very limited games but there are several accessories available which will enhance its gaming capabilities. First and foremost, there is a touch-screen support available for Civilization 5. Though adjusting the tablet into a dock can be bit tricky, once you have made the connection, it is quite amazing to see everything running smoothly. Without any need of keyboard and mouse, Razer Edge Pro Gaming Tablet can be easily taken away and it will be treated like 3DS and Vita.

The Razer Edge Pro Gaming Tablet features the display of 1366 x 768. Some gamers might be expecting a resolution of 1080 pixel in this device, but fewer pixels will help to lower the overall burden on graphics solution. Any other tablet with sample display might struggle to run even very basis games, so Razer Edge does a perfect job in those fronts.

Well known as a highly powerful tablet, it comes with Nvidia GeForce graphics as well as Intel Core i7 processor, which can easily handle even games such as BioShock Infinite. If user thinks that high powered specification is sufficient then the tablet also has different peripherals thereby offering users three different styles of gameplay. The tablet utilizes minimum powered Intel graphics in order to deal with daily tasks of Windows 8 tablet.

Razer Edge Pro Gaming Tablet is kind of a device which will impress any tech aficionado. It will definitely get significant reputation which hardly any tablet will able to get. It is the only portable tablet of its kind to feature the best graphic solutions and also packed with the usual whistles of a perfect touch screen device.