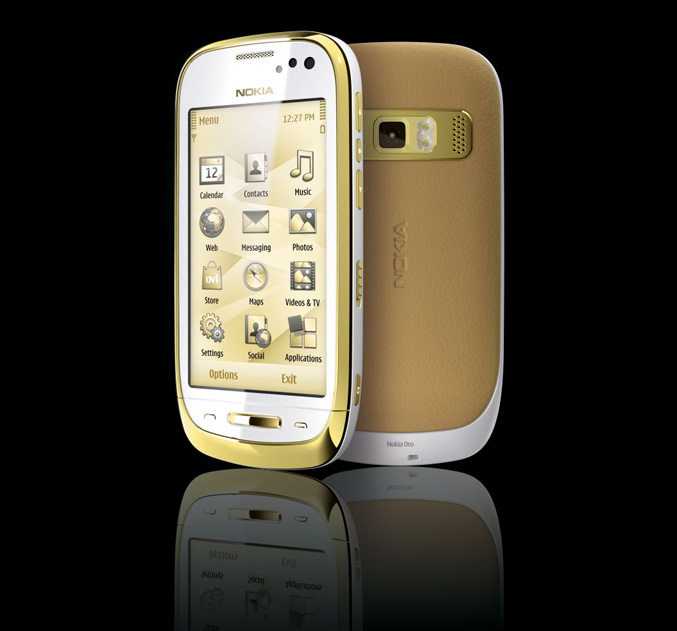 Nokia has announced its much anticipated Symbian limited edition phone, the Nokia Oro. As the name suggests, the Oro has 18 gold plating on its surface. With this phone, Nokia seems to celebrate the massiveness of its Symbian OS, as it is loaded with every Symbian feature that got a spotlight.Grandeously decorated with leather, sapphire and gold of course, the Oro is quite a royal phone from its very first look.

This limited edition phone is basically a 3.5 inch AMOLED touch screen phone enclosed in a Gorilla glass and except for the precious elements added to the design, it looks quite similar to the C6.The resolution is 16:9 with 640X360 pixel display. The phone features Symbian Anna in the 680MHz ARM processor with Broadcom BCM 2727 GPU. It is loaded with latest Bluetooth connectivity i.e. 3.0 and is 3G ready along with Wi-Fi connectivity.

The Oro has an inbuilt storage of 8GB which is expandable to 32GB .Among other inbuilt features, office software and java enabled games. It has a multi format audio and video player which is quite a feature when the formats on a continuous evolution. Also a 3.5mm audio jack has been provided in the device.

The phone is quite accessorized with the limited edition fabulous accessories too. A gold touch Bluetooth headset has been launched with the headset so that one never feels that the royal experience remains royal even used on the go.

The sales of the phone have been limited up to certain areas of the world but Nokia must be having plans to display the beauty to every corner of the world.