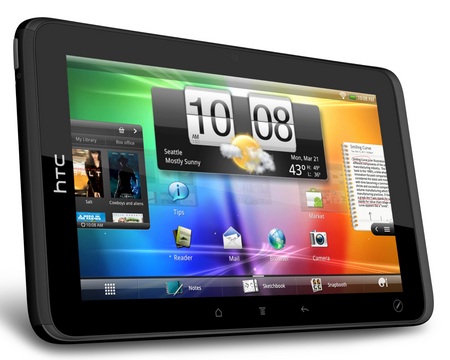 The HTC EVO View tablet is similar to the HTC Flyer, but has a few key upgrades that make all of the difference.  Despite having the same display, processor, and storage capacity, the HTC EVO View far surpasses the Flyer.  Why?  Simply because it is Sprint’s first WiMAX 4G tablet, meaning that this thing downloads and uploads faster than Jimmy John’s delivers sandwiches.  (Did anyone else think that those guys were actually Russian?  They had me fooled for the longest time…)

The HTC EVO View tablet is backed by a gray aluminum accompanied with some colorful red splashes around the camera and elsewhere on the device.  This tablet’s front facing camera is 1.3 megapixels, not terrible, but nothing compared to its rear camera, which is 5 megapixels.  One thing that makes the cameras more awesome is Snapbooth, which comes installed on the tablet, and is similar to Photobooth.  Additionally, the HTC EVO View tablet takes 720p video, which is relatively high quality.

Also included on the HTC EVO View tablet is a mini USB port for charging and whatnot, as well as a headphone jack.  Something that is unique about this cool HTC tablet is that there is a green LED embedded within the headphone jack.  (I’m not sure that there’s much use for it, but it’s cool nevertheless.)  The HTC EVO View runs on the Android 2.3 operating system and utilizes HTC’s Sense interface.  (It’s not my favorite, but it’ll do.)

The battery life is pretty strong, over twelve solid hours of use, but what makes the HTC EVO View tablet special is its ability to use WiMAX.  This device has unprecedented download an upload speeds of 10Mbps and 1.5Mbps, respectively.  You’ll be downloading music, movies, and other random stuff in a flash with this tablet, which is $399.99.

Jack Kieffer is a teenage gadget geek and the founder of Cool Gizmo Toys, a site dedicated to providing fun tech and toy reviews.