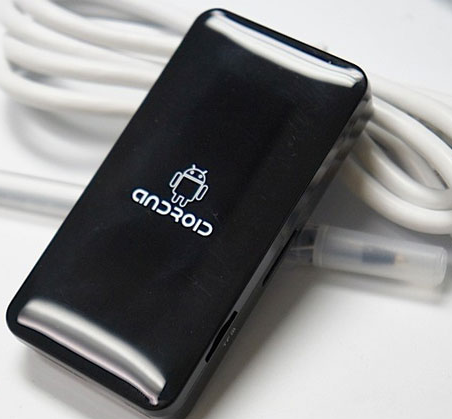 The phenomenon of entire Android systems entrenched in small, portable devices is a recent one with gadgets like the MK802 proving to be quite popular. Now, this technological theme has got a shot in the arm with the introduction of the all-new Android RK3066 miniature personal computer – developed by the Timing Power enterprise.

Presenting a hands-on evaluation of the Android Mini PC RK3066:

The RK3066, on first glance, betrays a rectangular, more rounded form than the earlier USB drive-shaped Android miniature computers. The device is light and portable with dimensions of 3.25 by 1.75 by 0.5 inches and a weight of 1.3 ounces. The RK3066 exudes a smart and functional all-black look with its chassis made entirely of high-grade plastic. There is a small mounting clip tethered to one side that, apparently, can be used to attach the RK3066 to a compatible television set.

The number and layout of the RK3066’s various controls are impressive. One notices a micro USB port (used to charge the device), a standard female HDMI-out port (useful for linkages with external displays), a regular USB port, and a 3.5 millimeter headphone slot. Fortuitously, Timing Power have also thrown in HDMI and USB cables for the users’ benefit. The lack of a main AC adapter, however, jars and will definitely be an issue to many.

The RK3066 boasts a fairly uncomplicated setup process. Once the device is connected to an external display (via the HDMI and micro USB functionalities) and switched on (by plugging it in as there is no power button), it intuitively starts up with the embedded Android Jelly Beam home screen. This quick process indeed does save a lot of time.

After booting, one can continue to configure other functional areas in a manner akin to other Android systems.

a)      The RK3066 is armed with a dual core 1.6-GHz Rockchip central processor and a 350 MHz Mali (400) graphics processor. These elements, aided by the 1GB RAM (upgradable to 2GB), impart speed, robustness, and multi-tasking abilities to the gadget. Also, high-powered games too may be played devoid of any lags.

a)      The RK3066 comes with Android’s Jelly Bean (4.1) iteration along with an array of Google applications like Gmail, Google Now, Voice Search, and Maps as well as access to Google Play online repository that permits users to download additional apps from the internet.

b)      Other useful apps on offer are Explorer, Apk Installer, Gestures Builder, WiMo, and eHomeMediaCenter that facilitates data sharing over Wi-Fi.

d)      One can routinely manage the on-screen controls via an external mouse and keyboard as there in touchscreen functionality (and hence no multi-touch support). Note that right clicking merely brings up the previous menu.

e)      Newer functions include a native screenshot application that allows the user, via an on-screen camera icon, to take screen images at pre-defined time durations (through a countdown timer).  There is also a facility to let the user choose his or her preferred display resolution; options range from a 480-pixel display right up to a 1080-pixel HD option.

f)       The RK3066 may also be used with external web cameras and well-known applications like Skype to conduct video calls. Once again, the actual process is fluid and worry-free.

The Android RK3066 Mini PC is a worthwhile purchase especially given its low price of just under USD 60.

Author bio: Patrick Hudson likes writing articles related to Technology News, Gadget Reviews and How To. He also does guest posting for buycharter.com – a site that offers savings and current information on charter cable.