Free Antivirus Software: A Look at the Top 5 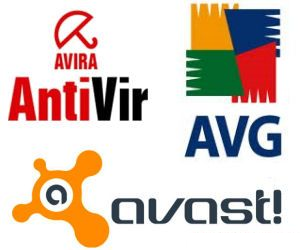 Malware is an umbrella term for viruses, trojans, spyware, worms, adware, and other threats that can infect your computer. One of the most commonly known antivirus protection programs is Norton, but like so many others it costs money. Purchasing antivirus protection is an upgrade in comparison to free programs, but free antivirus protection is good enough for most users. If you’re a business that depends on computers, make sure your IT service is protecting you with the right antivirus software.

avast! has consistently improved its detection software in recent years and it’s now competing with some of the best available. In comparison to other free options avast! offers more features than any other competitor, including internet site ratings and script malware protection to prevent browser threats. It’s incredibly user-friendly as well.

AVG provides a high level or protection for its free service. It has all the features needed to keep your computer free from malware, including cloud technology that quickly fights off threats. The only drawbacks to AVG are its slow scan speed and advertisements, but the advertisements can be disabled.

Avira is always considered one of the top free antivirus’ for its ability to detect malware at a high level. It’s very easy to use and you’d be hard-pressed to find another antivirus software that scans at the same speed. Avira’s updates are timely and efficient.

MSE has great detection rates and is especially noted for its capability of removing existing malware. It’s an easy to use software that requires very little interaction because it automatically updates and eliminates threats. One of its downsides however is the slow scan speed, but running scans overnight is a way to avoid this issue. It should be noted that MSE requires Windows for installation.

This antivirus is a good choice for average users looking for a simple solution. It has automatic updating and malware removal. Panda Cloud also has a relatively high detection level because it releases updates extremely fast. Even though it doesn’t take up much space and resources, Panda Cloud has a reputation for slowing down your computer from time to time.

Each free antivirus system has its pros and cons so you need to determine what’s important to you. Are you looking for usability, scanning services, or superb malware protection? You should also consider whether your computer is already infected by viruses because certain programs are more efficient at removal and cleaning up. Regardless of which antivirus you choose, any one of these five suggestions should get the job done.