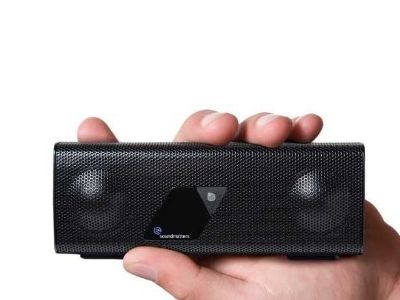 For all those who have this strong thirst to boast off their PMPs sound to the people they know but couldn’t find a convenient way to do that because of bulky hardware and lots of wires, we have a solution. Foxl has launched it Bluetooth sound bar which is as portable as a candy bar is and it has stroked quite some gold in touching the high horizons of classy sound quality. For all those who don’t know about Foxl, it is quite a established name in the sound industry and is quite known for its dedicative work on the iPod and other such portable media players.

This Australian buzz has now come up with A2DP Bluetooth enabled sound bar which is quite in news for the small size and the design. It has been designed by a NASA scientist and is on the charts for the classy hassle free sound it is providing.
The sound bar comes with two speakers which are an inch in diameter and are tuned to around 100 GHz of sound, providing eight full octaves for eerie detail of sound and speech. The Bluetooth facility provides a high quality wireless sound for distances up to 5metres.

It is quite light in weight and can last for around 5 hours on battery. The little master’s predecessor has been named as the gadget of the year by time magazine in the year 2008 and similar wonders are expected from this one too.

What makes such device a rare market product is the reason that most of the technologies used in it are patented which include the Magnetic Drive Twoofers that provide around 100GHz of pure sound. A definite buy for an audio maniac from audiophile, this is priced around $199.00.