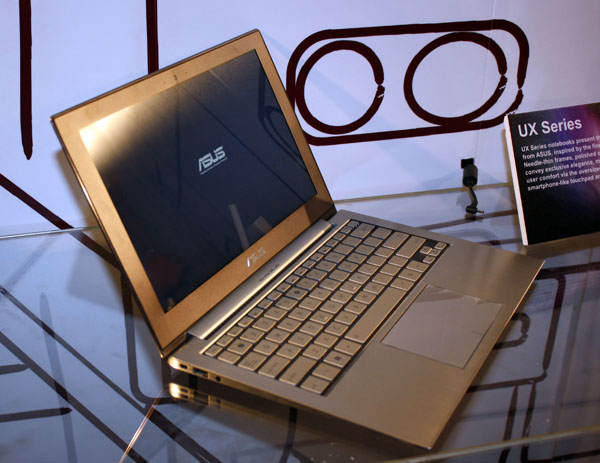 “Inspiring Innovation, Persistent Perfection”, with this tagline, Asus has always given the consumers something to die for every now and then. The Asus EEEPC got quite a fair response in the educational computer market recently. Now the Taipei giants have come with a superfast and super powerful netbook which is the first one to have Intel’s Ultrabook technology and is covering all the dimension of latest technologies one could imagine. The machine’s called Asus UX21 and it was launched at the Computex 2011 at the company’s homeground, Taipei.

Launched just prior to the official launch of the Ultrabook by Intel, the UX21 is looks quite majestic with the looks similar to the Macbook Air .Gorgeously finished with the Aluminium touch , the UX21 is 7mm at the back which cuts down to 3mm when we come to the front. It even weighs quite as much as the Air but differs or rather leads in the features.USB 3.0, mini HDMI port and the Solid State Drives, the SSD’s , all are equally boasting in the feature chart of the device. With 64 GB and 128 GB capability SSDs, the UX21 can boot in just two seconds, according to the company experts.

UX21 runs on the second generation Intel corei5 and core i7 processors which make one of the fastest netbooks available. The netbook is expected to be shipped by September this year which quite enough time for the company to plan a market dominant strategy and have a record sale. This big surprise has been with collaboration of Intel and is definitely a panic to the guys at the Infinite Loop and Palo Alto.