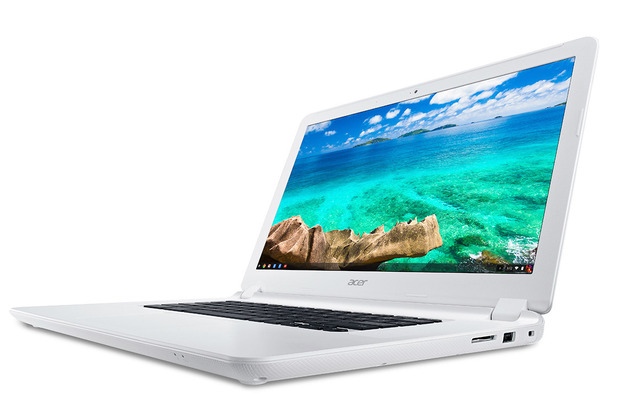 Acer continues to market new models of laptops based on Chrome OS, an operating system from Google. Until now, these devices have been relatively small with screen size not exceeding 13 inches, but today things have changed. A recently announced new device – Acer Chromebook 15 with 15.6” display has been presented on this year’s CES 2015 exhibition, and in just a few months has become one of the most sought after gadgets. This wonderful device may not find popularity among classical laptop enthusiasts immediately, but the adaptation of the industry standard for software, like Adobe Photoshop, under Chrome OS gradually destroys the myth about Chromebook incompatibilities.

This machine is perfect for surfing the Internet and can actually turn into a serious tool. The large size of the Acer Chromebook 15 only confirms this notion. The first Chromebooks were equipped with weak ARM-based processors, but this new model boasts with Intel’s (Core i3 or Celeron N2830) latest processors based on Broadwell architecture supported by Intel HD integrated graphics. Given the voracity of the Chrome browser, manufacturer prudently prepared a version with 4 gigabytes of RAM (over the traditional two gigabytes). It may not be able to run graphically heavy games and programs, but given the platform that is enough.

Now the new IPS-display with a FullHD resolution (1920×1080 pixels) will allow enjoying the modern look of Chrome OS even more. However, there is a version with a simpler TN display with a resolution of 1366×768 pixels. Acer Chromebook 15 disk space is limited to 16 or 32 gigabytes of flash memory, which is much faster than the traditional mechanical HDD devices. But with the help of wireless adapter that supports Wi-Fi 802.11ac and MIMO 2×2 technology acceleration, it will be very convenient to store and then grab data through cloud services with a maximum speed. All customers will receive a gift of 100 gigabytes in Google Drive (although only for 2 years, then you will have to pay for it).

Two USB-outputs (one of them is USB 3.0, which is 10 times faster than USB 2.0), HDMI port, Bluetooth 4.0 and a slot for memory cards SD / SDHC / SDXC – are all available; and in addition it’s only 2.2 kg in weight. Full-sized upward speakers, large sized touch-pad and built-in webcam supporting HDR has been included, as well. Although the 15.6-inch laptop is hardly portable, Acer Chromebook 15 is not deprived in terms of autonomy. It is able to work as much as 11.5 hours on a single charge of the internal battery, which is a lot if you compare it to the modest 3-4 hours on the classical laptops. The body is very durable. It can easily withstand a 60 kg pressure and falling from a height of 45 cm.

Chrome OS still cannot be called a full-fledged operating system, but Google do their best to make it a reality. This device is perfect for people who want to get a working machine, which is able to stay on much longer than usual Windows laptops for little money ($350 with FullHD display, $250 for a low cost display). Of course, such a device will never replace a full-fledged PC, but it can be a nice addition to the main unit for all fans of unusual solutions in the segment of mobile electronics.